Your love story is unique. The way you met, the way you fell in love, the way he or she proposed… it was all unpredictable, right? So shouldn’t your wedding be just as unpredictable and unique? We all know that there can be a certain amount of pressure to conform when it comes to weddings: to dress a certain way, to behave a certain way, to say certain things, but we want you to celebrate your special bond exactly how you want to. As much as adhering to traditions may make for a perfect wedding for some couples, we want to eliminate any pressure that you may be feeling and help you to realise that this is your big day and you can celebrate it however you wish. 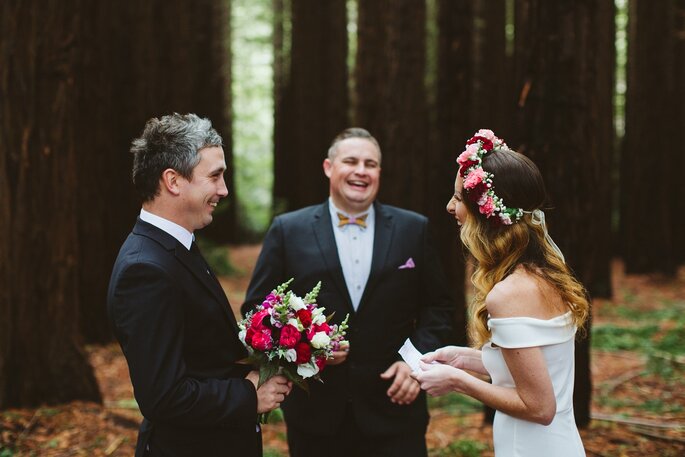 So who better to call upon for advice than Josh Withers: a wedding celebrant who is crazy about awesome marriage ceremonies that are not defined by society or religion, but that are simply defined by you! “When it comes to civil weddings, I’m the closest thing to an authority on celebrating marriages, call me the Wedding Sheriff. And as the ranking officer here I’d like to liberate you of all wedding traditions.” With no intention of telling you what to do or what not to do, his one aim is to liberate you to make your own decisions in order to create a day that celebrates nothing other than the two of you. As Josh talks us through a few wedding traditions below, his hope is that you consider each one, think about what they mean to you and understand why it’s ok for you to break them. Let’s get started! 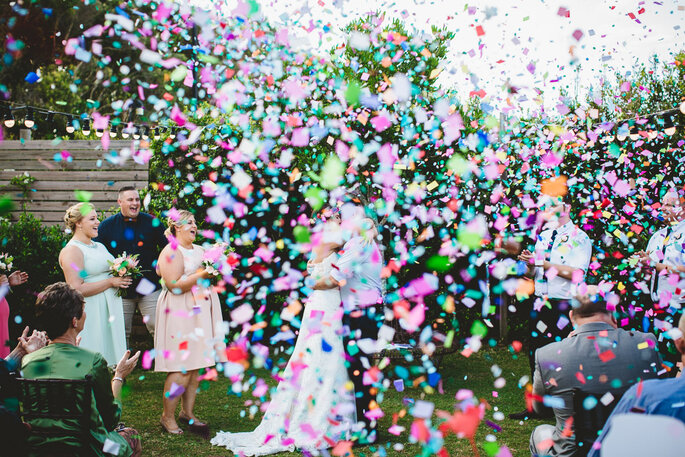 The white dress: “The colour of your dress (or suit) has no bearing on the amazingness of your marriage. Before Queen Victoria wore white, everyone just came in their best. You can too!”

Gold ring: “The Egyptians started the trend, and I quite like it, but the colour and style of the ring doesn’t matter, and which finger you wear it on, or if you don’t wear one at all is up to you. The exchanging of rings holds no legal power, if it did, construction workers the world over would be in big trouble. As for which ring it’s worn on, every finger has a “vein of love” so each finger will deliver a sufficient amount of commitment.”

Rain on the day: “An odd combination of people groups find rain on your wedding day traditionally good luck: Hindus and Italians. For all we know they might be right or wrong but I say we can all make our own luck, just have a god plan B for your ceremony if it’s plan A is outside.”

Something blue: “Collecting the blue, borrowed, and new items can be fun, but your marriage will be no more pure and loving with them.”

The wedding cake: “Cakes are really lovely and I will have one if you give it to me, but, they’re not a requirement to celebrate anything including your nuptials. Sometimes they’re a great dessert, and sometimes they’re just a great food. But a “cake cutting ceremony” or photos setup of you cutting a cake, I don’t know what they mean, and if you don’t either, maybe pass them over.”

Flowers, bouquets, table centrepieces:  “Flowers are pretty and beautiful, however, if you don’t agree with that opening statement then there is no need for you to buy any. In fact I’d say that most florists would rather not get your enquiry if your passion for flowers isn’t to the same level as their own.

The guy waiting at the end of the aisle: “The traditional format of a guy waiting for his bride has a real patriarchal feel around it and that’s no surprise. Traditionally this was the groom meeting the bride for the first time, timed very closely with the first time the bride wondered what the heck was going on. If you both know each other, don’t be afraid to drop this and the next item.”

The bride being given away: “As the groom would wait the bride would be brought to him, and often beyond her will. What a fun roleplay to bring out at your marriage celebration, the bride giving in to her father’s will and being dragged down the aisle beyond her own. With that said, many have repurposed this tradition for their own purposes because the bride really loves her father and that’s a perfectly good reason to have him walk you down. Are the groom’s parents doing the same?”

Saturday weddings: “The Saturday tradition is relational to how society used to work. We’d all be at the factory all week long, and church was on Sunday, so Saturday was when the fun stuff happened. I’d be willing to bet that you’ve got fun stuff in your calendar all week long now so why not stretch the wedding to one of the six other awesome days in the week?”

Bucks and hens parties: “Strippers and penis straws? What a purposeful way to celebrate your life getting better because you’re together. Honestly, you can party however you want, but don’t celebrate the end of your freedom, if anything, you are reaching a whole new level of freedom in marriage because you’re marrying the person who makes you better!”

Tossing things: “Bouquets and garters being thrown are fun, but after asking people to get involved for the last eight years I can tell you that 1) no single lady I’ve seen catch a bouquet has been the next to get married, 2) no guy catching a garter has felt comfortable about the experience, and 3) everyone would wish you wouldn’t do this throwing thing because they, you, and I don’t know why it exists.” 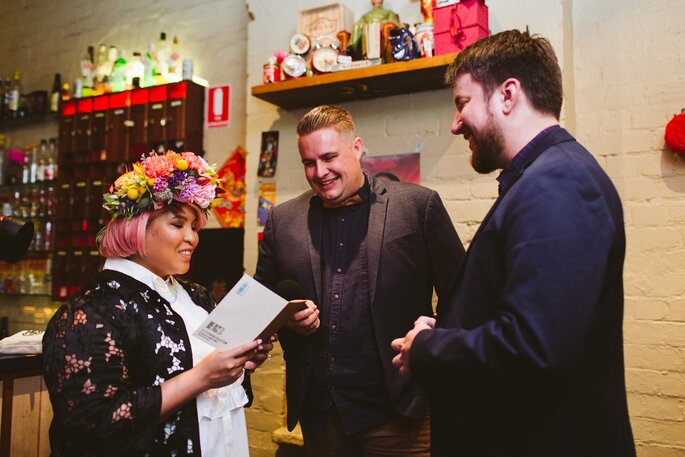 Josh marrying Ady and Chris | Photo: Heart and Colour for The Elopement Collective

So there you have it! This certainly provides food for thought and makes us think about the purpose of and meaning behind these traditions which have become so deeply ingrained in our society. We think Josh’s modern and refreshing attitude towards marriage is fabulous and if you do too, why not give him the honour of marrying you? His jovial personality and extreme passion for creating unique, cool weddings filled with happiness and truth make him someone that we would whole-heartedly recommend to you. So if you think Josh is as cool as we do, then he invites you to “get together and create something amazeballs!“

The essentials from Planning the wedding

These may also interest you

Planning the wedding
10 Jan 2020
Planning a garden wedding can be a challenge, but with these 8 tips you will have the garden wedding you have always dreamed about!

7 Wedding Invitation Etiquette Mistakes to Avoid at All Costs

Planning the wedding
21 Dec 2019
The wedding invitation is the most important announcement before the wedding, make sure to not make these etiquette mistakes!

Everything You Need To Plan An Unforgettable Wedding In Italy

Planning the wedding
10 Sep 2019
Not only has it been voted one of the best places to get married in Europe, it also continues to surprise wedding experts with its myriad of cultural customs and traditions. All of this is thanks to their expert wedding specialists who are more than happy to help soon-to-be-wed couples design their big day!

How To Calculate Your Wedding Budget In 5 Simple Steps

Planning the wedding
29 Mar 2019
After letting all of your nearest and dearest know your big news, the exciting planning process begins - although not before you decide on your budget for the big day. Here are 5 simple steps to planning your wedding budget...

The Ultimate Rom-Coms to Watch Whilst Planning Your Wedding

Planning the wedding
29 Jan 2019
Planning your wedding can be an immensely stressful time, and so it is always worth taking an evening off to catch up with the latest flicks on Netflix. We've compiled a list of our favorite wedding and romance-themed films for your perusal - so get the popcorn on, grab a bottle of wine, and relax!

14 Things To Avoid Doing Whilst Planning Your Wedding

Planning the wedding
27 Sep 2018
Your wedding is one of the only things that you cannot properly pre-organise. The wedding world is big and competitive, and it can be difficult to figure out what you want, and who you want it from - so make sure you don't fall into any of our 14 traps!

Undecided On What To Give Your Fiancé On Your Wedding Day? Here Are 8 Ideas That You'll Love

Planning the wedding
1 Sep 2018
Make your life a little easier and gain inspiration from our presents ideas on what to give your fiancé on the day of your wedding.

How To Keep Your Wedding Dress Safe in 5 Steps

Planning the wedding
30 Aug 2018
Once your wedding day is over, it's difficult to know what advice to take regarding future care of your wedding dress. Here, Zankyou provides some simple tips on the best ways to look after one of the most important items in your wardrobe.

The essentials from Planning the wedding