China is one of the most varied countries on our planet. Its ancestral culture has been enriching the Earth for centuries, which is why it is considered to be the cradle of our civilization. It also boasts a natural heritage of unrivalled quality, endowing the country with two contrasting and equally beautiful environments.

This Asian country is, therefore, a top destination for exotic honeymoons, with a new adventure awaiting in every corner. If you want to discover a completely different culture to the western one, then consider jetting off here for a unique yet romantic first travel experience as newlyweds. 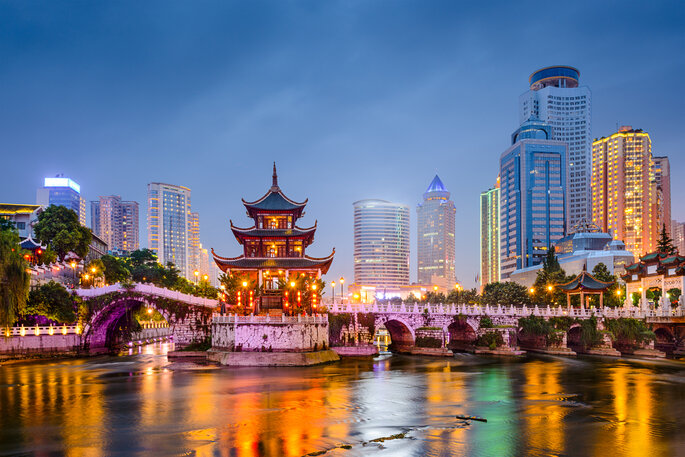 Due to the differences between East and West, traveling to China is an adventure in every way. For this reason, it’s a good idea to wise up on the need-to-know about this unique destination.

China is the most populated country in the world with almost 1400 million people; next to India (which is very similar in population), it far exceeds the developing world, and it also borders the United States, with 300 million inhabitants. China is the third largest country in the world, which speaks of a wonderful chaos that you will have to adjust to. There are cheap flights and good trains available in order to move between cities. 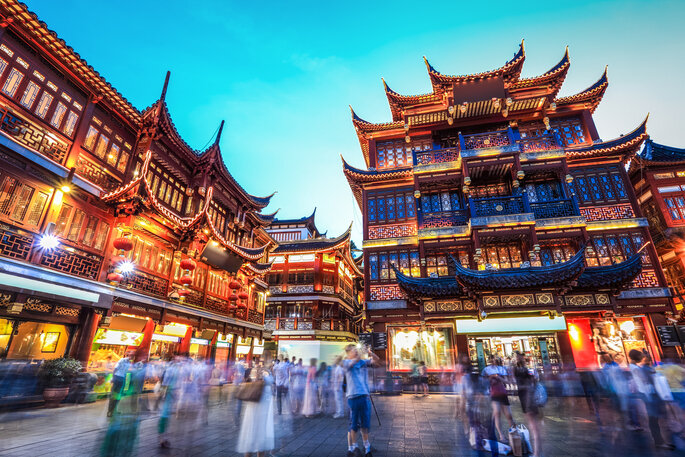 To visit China, you will need a visa that costs around 170 AUD. The official language is Chinese Mandarin, and English is not generally spoken unless it is in large hotels or tourist ares, (or in special cities such as Hong Kong), but you should have no problem trying to communicate if you learn a few phrases, bearing in mind that even gestures are markedly different in this oriental country.

The currency exchange benefits you if you do it on Chinese soil, because it will be cheaper and will prevent you from resorting to your card, which is only admitted in very few places for tourists.

With regards to the climate, a quite important aspect of travelling, you should know that the differences between the North (which is colder), and the South (a hotter destination and the home of Shanghai), are notable. With the rainy season between June and September, the best times to visit China are in Spring (April and May) and in Autumn (end of September and October).

The best thing that a country can offer its visitors is a mix of environments, a contrast that is capable of providing all sorts of sensations. China is certainly one of these countries, because it brings together its legendary traditions, some historical and others spiritual, its technological progress, the magic of its natural landscapes and authentic delicacies that are inscribed in its world famous cuisine. Here you will find scenes as diverse as The Great Wall of China, the cities of Shanghai or Hong Kong, and the Jiuzhaigou National Park.

Due to its extraordinary population, China has some of the most inhabited cities in the world, but also the most impressive. Among the most known, its capital, Beijing, the aforementioned Shanghai (the most populated of China and second worldwide, with more than 30 million residents) and Hong Kong (Special Administrative Region of China), the latter being one of the most modern in the world. Also noteworthy are those of less significance internationally, but equally as beautiful, such as Suzhou and Macao. 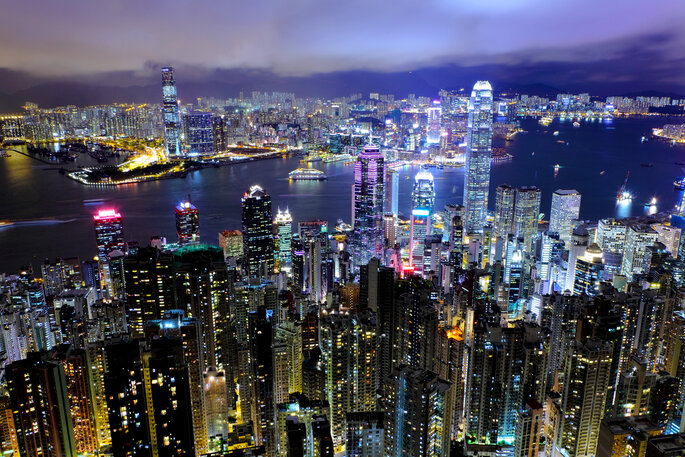 China is also one of the most important places in the world in terms of religious traditions (Buddhism, Taoism, Confucianism and other traditional Chinese religions coexist), as reflected in the incredible plethora of sacred spaces that speak of the mythical history of the country. As the main representative of China’s national culture, the Shaolin Temple is definitely one to see, as well as the vast Forbidden City, inhabited by emperors of the country for more than 500 years, the Great Buddha of Leshan (considered the tallest Buddha statue in the world, or the Potala Palace in Lhasa (Tibet Autonomous Region, also belonging to China). 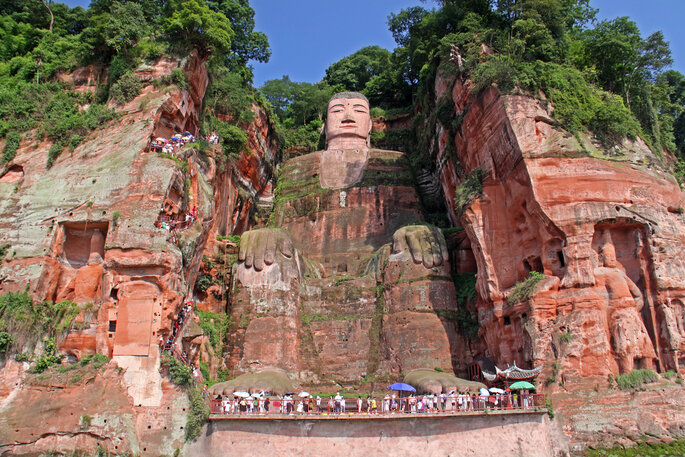 With regards to natural wonders, China offers places of a very special mystical beauty. Some of the most beautiful are the Jiuzhaigou Park, the Zhangjiajie Park, the spectacular Yunnan region, the wild Yangshuo mountain formations, and with a small human contribution, the rice fields of Guilin or the Suzhou Classical Gardens. In the conservation centers of Chengdu, you can appreciate the character and care of some animals in danger of extinction, with the panda as the undisputed star of the show. 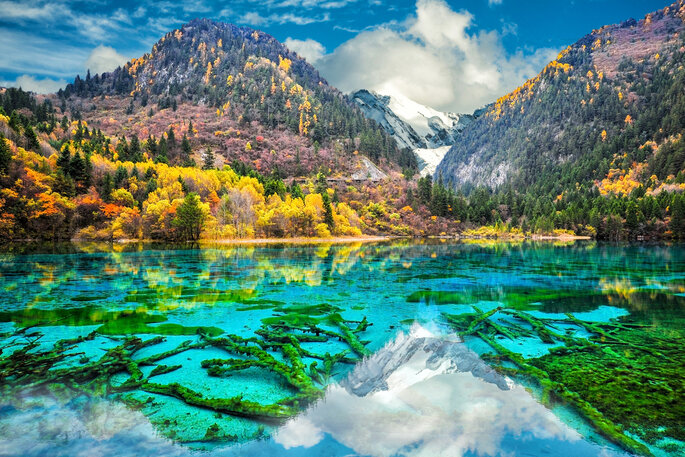 1. Beijing. The capital of the People’s Republic of China houses more than 20 million people and best combines legendary tradition and modernity. For key places to visit, among the thousands that exist in the city, there is the glorious Temple of Heaven, Forbidden City, Tian’anmen Square or the Mausoleum of Mao Zedong, dotted around the skyscrapers, high-tech stores and top-level innovations. 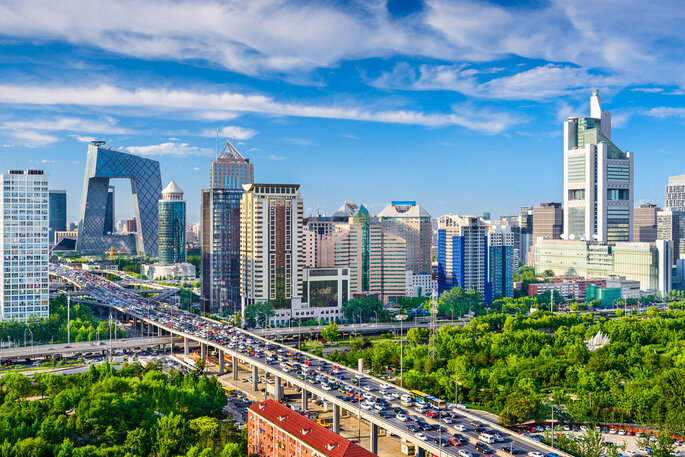 Photo via Shutterstock: ESB Professional
save 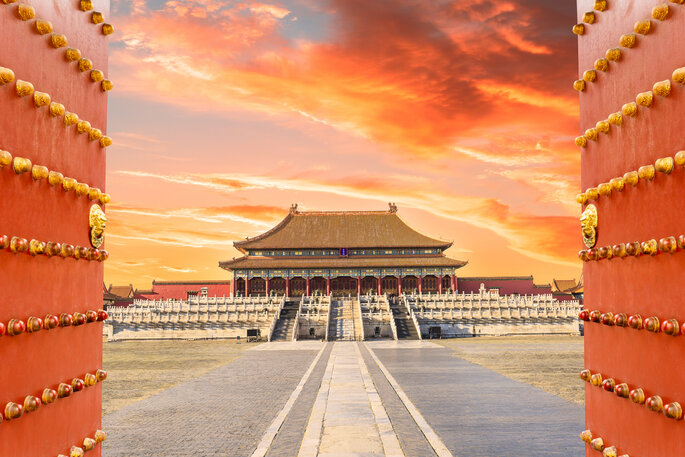 2. The Great Wall. This is the principal attraction of China and it’s not hard to see why. With 21,000 km in length and 10 centuries of construction (between the V and the XV centuries), it is an incredible architectural work that can be visited from many points of the country: from Beijing, Simatai and Jinshanling, and Badaling (which is the most visited).

3. Yunnan. One of the most natural and enriching regions of China includes its famous and impressive Yuangyang rice terraces and the Tigre Falls Gorge, which is the deepest river canyon of our planet. But in addition to these enchanting natural spots, Yunnan harbors the splendor of ancient cities such as Dali, Shaxi, Lijiang or Shangri, as well as an interesting variety of ethnic customs and native cultures that populate the area. 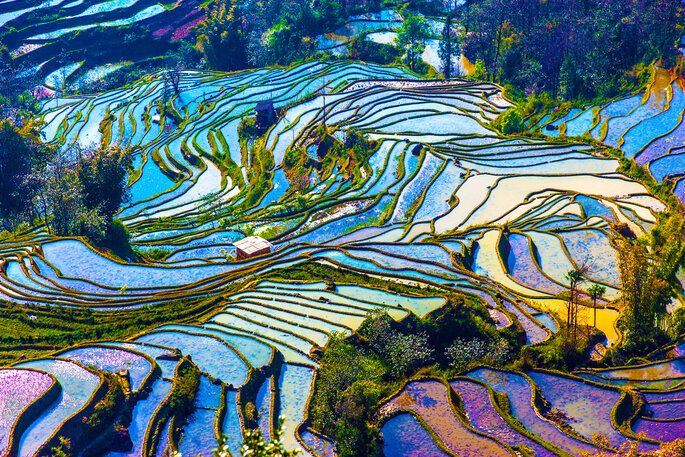 4. Shaolin Temple. This is just one of the many temples that form the spiritual component of China’s rich culture. You can discover the religious traditions of the temple through its pagodas, the typical Buddhist structures of Asian culture that are intricately and geometrically arranged with grandeur. In Shaolin you can also enjoy watching or partaking in the incredible sport of martial arts.

5. Xi’an. The city of Xi’an is well known for being at the eastern end of the famous Silk Road and, in recent decades, for the Terracotta Warriors: 8000 life-size figures of soldiers and their cavalry that a farmer found by accident in the 70s! These incredible figures, which are valued highly as part of China’s diverse heritage, were carved to guard the Mausoleum of the First Qin Emperor with the aim of continuing to lead his troops after death.

China has the character of a remote, distant country, lost in the immensity of nature and the richness of its own culture. Therefore, traveling to China on your honeymoon is an adventure in all senses of the word, an exciting step towards getting to know one of the most authentic countries on our planet.

These may also interest you

Honeymoon destinations
30 May 2019
India is one of the greatest places in the world, and many parts of it remain unexplored to this day. For a honeymoon you can never forget, choose India!

Honeymoon in Paris: Say 'Oui' to a Week in the Most Romantic Place on Earth

Honeymoon destinations
22 May 2019
Paris is regarded as the most romantic city in the world, and so why not make it the destination for your honeymoon in 2019? What setting could be better for your first trip as newlyweds.

Sun, Sea and Sand: The Best Exotic Destinations For Your Wedding Abroad in 2019

Honeymoon destinations
15 Mar 2019
Looking for the perfect seaside destination for your Destination Wedding in 2019? Then look no further, because we have the perfect places right here, and some great recommendations for hotels too!

Honeymoon in Greece: A Classical Destination for the Most Romantic Getaway

Honeymoon destinations
2 Dec 2018
Greece is one of the most popular destinations for weddings abroad - but why not explore its 8,000 islands for your honeymoon? We promise that you will have the experience of a lifetime - so learn more now!

Honeymoon in the Dominican Republic: The Country That Has It All

Honeymoon destinations
29 Nov 2018
Beautiful beaches, unbeatable culture and entrancing nature are the three pillars of this Caribbean country that will transform your honeymoon into the immense journey that you deserve.

Honeymoon in Amsterdam: The Perfect Place to Explore

Honeymoon destinations
19 Nov 2018
Looking for an innovative, exciting destination for your first holiday as newlyweds? Then why not discover Amsterdam and everything it has to offer.

Honeymoon in Thailand: The Dream Trip

Honeymoon destinations
17 Jul 2018
Costa Rica, the land of 'La Pura Vida', is one of the most diverse and beautifully exotic countries in the world. With a vibrant, eccentric and relaxed atmosphere throughout it's tropical terrain, it really is the perfect destination for an adventurous honeymoon.